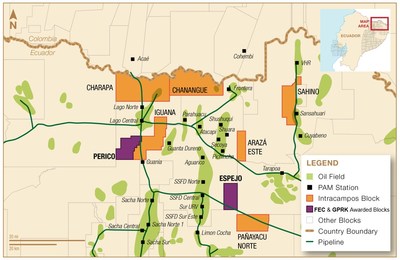 TORONTO, March 13, 2019 /CNW/ - Frontera Energy Corporation (TSX:FEC) ("Frontera" or the " Company") and GeoPark Limited (NYSE:GPRK) ("GeoPark"), as part of a consortium (Frontera 50%, GeoPark 50%), are pleased to announce that they have been awarded production sharing contracts on two blocks in Ecuador's Intracampos Bid Round (the "Bid Round") offered by the Ministerio de Energia y Recursos Naturales No  Renovable, who will confirm the preliminary results by mid April 2019.

The Perico and Espejo blocks are prospective, low-risk exploration blocks located in Sucumbíos Province in the north-eastern part of Ecuador, in the Oriente basin, and have a total area of approximately 13,504 ha (33,369 acres), of which Frontera holds 6,752 ha net (16,685 acres), see map below.

Both blocks are covered with 3D seismic and are adjacent to multiple discoveries and producing fields. The Oriente basin is one of the most prolific petroleum systems in Latin America, currently producing more than 500,000 bbl/d and with access to excellent infrastructure with spare capacity and a well-developed service industry.

Richard Herbert, Chief Executive Officer of Frontera commented: "We are very pleased with the results of the Intracampos Bid Round and the acquisition of these high potential blocks as they were our top choices and are located near existing producing fields and related infrastructure. The award marks Frontera's entry into Ecuador and is the third initiative delivered as part of the Company's strategy to enhance its medium and long-term growth prospects (in addition to our entry into Guyana and the farm-in on VIM-1 in Colombia).

This successful Ecuador bid extends and consolidates Frontera's position in the North Andean region of South America. We are pleased to be partnered with GeoPark, which has significant oil and gas experience and operations throughout South America."

The consortium was awarded the Perico block, which consists of 7,170 ha (17,700 acres) located in the Intracampos area of north east Ecuador. The exploration work commitments include the drilling of four wells, 72 km2 of 3D seismic reprocessing and 72 km2 of magnetometry and gravimetry, and a surface geochemical program.

The consortium was awarded the Espejo block, which consists of 6,334 ha (15,650 acres) located in the Intracampos area of north east Ecuador. The exploration work commitments include the drilling of four wells, plus a 3D seismic acquisition program of 55 km2, 74 km2 of 3D seismic reprocessing, 63 km2 of magnetometry and gravimetry, and a surface geochemical program.

Frontera Energy Corporation is a Canadian public company and a leading explorer and producer of crude oil and natural gas, with operations focused in South America. The Company has a diversified portfolio of assets with interests in more than 30 exploration and production blocks. The Company's strategy is focused on sustainable growth in production and reserves. Frontera is committed to conducting business safely, in a socially and environmentally responsible manner. Frontera's common shares trade on the Toronto Stock Exchange under the ticker symbol "FEC".

If you would like to receive News Releases via e-mail as soon as they are published, please subscribe here:
http://fronteraenergy.mediaroom.com/subscribe.