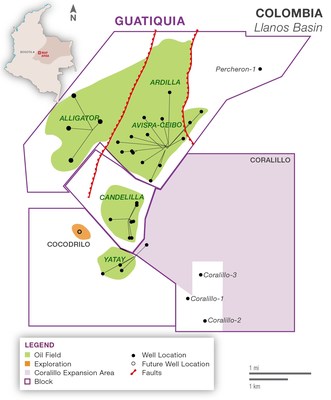 TORONTO, Jan. 15, 2019 /CNW/ - Frontera Energy Corporation (TSX: FEC) ("Frontera" or the "Company") announces an operational update. All values in this news release and the Company's financial disclosures are in United States dollars, unless otherwise noted.

Current production is approximately 72,000 boe/d before royalties (64,000 boe/d after royalties), following the completion of the Quifa SW water handling expansion project and strong production from the Candelilla-7 development well.

During the first quarter of 2019, the Company plans to drill 27 development wells, including 23 in the Quifa area, four exploration wells (two at Sabanero, one at Jaspe and one at Mapache) and one water injection well at Copa-A Norte. At the Copa field, increased development drilling combined with increased water injection drilling in 2019 is expected to increase field level production from approximately 4,000 bbl/d currently to over 10,000 bbl/d by 2020.

The completion of the Quifa SW water handling expansion project was completed on time and on budget, with current water disposal volumes of over 350,000 bbl/d resulting in an incremental 4,300 bbl/d of oil (approximately 2,600 bbl/d to Frontera), from 76 reactivated wells. Full water injection capacity to over 400,000 bbl/d is expected in the near-term as the final pump is commissioned.

On December 2, 2018 the Company began drilling the Candelilla-7 development well on the Guatiquia block, which reached a total depth of 11,858 feet (11,669 feet TVD) on December 19, 2018. The well encountered 28 feet of net pay in the Mirador formation, 9 feet of net pay in the Guadalupe formation, and 56 feet of net pay in the Lower Sand-3 formation. The well was completed in the Lower Sand-3 formation with an electrical submersible pump. The Lower Sand-3 formation was flow tested for approximately 13 days at an average rate of 4,195 bbl/d of 43 degree API oil with an average water cut of 1% at stabilized bottomhole flowing pressure with a 5.9% drawdown. Current production is over 4,600 bbl/d under natural flow. There have been a total of 47,379 bbls of oil produced during the Lower Sand-3 testing period. The increased volume of high quality crude from Candelilla-7 will help reduce the need for the Company to purchase third party blends required to upgrade heavier grade oil production in other parts of the portfolio to meet pipeline specifications.

On December 19, 2018 the Company was informed by the Agencia Nacional de Hidrocarburos (the "ANH") that the proposed expansion of the Coralillo exploitation area on the Guatiquia block was approved. The expansion adds 1,383 hectares (approximately 3,400 acres) to the Coralillo exploitation area, for a total area of 1,571 hectares (approximately 3,880 acres). The expanded area will fully capture the potential Lower Sand-1 and Guadalupe pools discovered in the Coralillo-1 and Coralillo-3 exploration wells and allow for the drilling of between seven to nine development locations. The Company began drilling the Coralillo-2 development well on January 11, 2019.

On December 7, 2018 the Company began drilling the Chaman-2D exploration well on the Sabanero block, which reached a total depth of 4,550 feet (3,348 feet TVD) on December 20, 2018. The well encountered 15 feet of net pay on rock, in the Basales formation. The well was completed in the Basales formation with an electrical submersible pump. The zone was flow tested for 7 days at an average rate of 107 bbl/d of 12.9 degree API oil with an average water cut of 85% at stabilized bottomhole flowing pressure of 1108 psi with a 10% drawdown. The testing was terminated.

On January 5, 2019 the Company began drilling the Seje-1 exploration well on the Sabanero block targeting a separate structural closure from the Chaman-2D well.

On December 13, 2018 the Company began drilling the Jaspe-7D exploration well on the Quifa Norte block in the Quifa area. The well was drilled to a total depth of 4,403 feet (3,515 feet TVD), in a down dip position and encountered non-commercial hydrocarbons and was abandoned.

On January 10, 2019 the Company began drilling the Jaspe-8D exploration well on the Quifa Norte block in the Quifa area. The well was drilled to a total depth of 4,710 feet (3,437 feet TVD) on January 14, 2019. The well encountered 21 feet of net pay, oil on rock, in two zones of the Basales formation. The well is being cased for evaluation and testing.

Peru production in the fourth quarter of 2018 averaged an estimated 8,926 bbl/d before royalties (7,603 bbl/d after royalties), an increase of 93.4% compared to the third quarter of 2018. Production from Block 192 in Peru remains shut in with the contract in force majeure as a result of community disputes relating to the NorPeruano pipeline in areas outside of Block 192. It is now expected that the contract relating to Block 192 will be extended to at least November 2019, from September 7, 2019 previously. Current production from Peru is approximately 930 bbl/d before royalties (790 bbl/d after royalties) which includes 150 bbl/d from Block 192 used for internal consumption. Peru production was estimated at 11,550 bbl/d before royalties (9,850 bbl/d after royalties) prior to the force majeure event on the NorPeruano pipeline in late November.

As recently reported, progress continues to be made with respect to the finalization of a joint venture agreement with CGX Energy Inc. ("CGX" TSXV:OYL). A definitive rig agreement has been executed with ROWAN RIGS S.A R.L and CGX for the use of the Ralph Coffman offshore jack-up rig which is targeted to commence during the second quarter of 2019. All the required activity is being undertaken to ensure the Utakwaaka-1 exploration well will be drilled by November 27, 2019 to satisfy the contractual commitment.

As at January 14, 2019 the Company has repurchased for cancellation 2,062,885 shares at an average cost of C$14.20 per share for a total of C$29.3 million ($22.2 million). A further 2,937,698 shares are available for repurchase under the terms of the amended Normal Course Issuer Bid. A dividend of C$0.33 per share is payable on January 17, 2019, to shareholders of record as of January 3, 2019. The dividend reinvestment plan was taken up by 23.8% of shareholders of the Company's outstanding shares as of the record date. The Company's dividend policy is to pay a quarterly dividend of approximately $12.5 million during periods in which Brent oil prices sustain an average price of $60/bbl or higher. The declaration and payment of any specific dividend, the actual amount, the declaration date, the record date, and the payment of each quarterly dividend will be subject to the discretion of the Board of Directors.

The Company is pleased to announce that it will be hosting an investor and analyst day on Thursday February 7, 2019 from 8 a.m. until 4 p.m. in Bogota which will be webcast via the Company's website. Those wishing to participate in the webcast should pre-register for the event using the link on the Company's website www.fronteraenergy.ca.

Frontera Energy Corporation is a Canadian public company and a leading explorer and producer of crude oil and natural gas, with operations focused in Latin America. The Company has a diversified portfolio of assets with interests in more than 30 exploration and production blocks in Colombia and Peru. The Company's strategy is focused on sustainable growth in production and reserves. Frontera is committed to conducting business safely, in a socially and environmentally responsible manner. Frontera's common shares trade on the Toronto Stock Exchange under the ticker symbol "FEC".

If you would like to receive News Releases via e-mail as soon as they are published, please subscribe here: http://fronteraenergy.mediaroom.com/subscribe

In order to improve the comparability of reported operational and financial results amongst its Canadian, Colombian and Latin American focused peer group, Frontera has changed its methodology of reporting production volumes to a Company working interest before royalty basis from the current practice of reporting net production volumes after royalties. The change is effective starting with results presented for the fourth quarter of 2018 and is also reflected in our 2019 guidance metrics. Production will be calculated as total amount of the Company's working interest production (before royalties) and volumes produced from service contracts. The Company believes that reporting production on this new basis will result in greater alignment with its industry peers and is more reflective of daily production activity and operational cost drivers.

Disclosure of well tests results in this news release should be considered preliminary until detailed pressure transient analysis and interpretations have been completed. Hydrocarbons can be seen during the drilling of a well in numerous circumstances and do not necessarily indicate a commercial discovery or the presence of commercial hydrocarbons in a well. There is no representation by the Company that the disclosed well results included in this news release are necessarily indicative of long-term performance or ultimate recovery. As a result, readers are cautioned not to place reliance on such rates in calculating the aggregate production for the Company or that such rates are indicative of future performance of the well.

The term "boe" is used in this news release. Boe may be misleading, particularly if used in isolation. A boe conversion ratio of cubic feet to barrels is based on an energy equivalency conversion method primarily applicable at the burner tip and does not represent a value equivalency at the wellhead. In this news release, boe has been expressed using the Colombian conversion standard of 5.7 Mcf: 1 bbl required by the Colombian Ministry of Mines and Energy.